Mill City Haunts Returns! A Halloween Festival of Lights and Activities in Pawtucket

The ghosts and goblins of Pawtucket will be conjured out of the darkness to haunt the city’s historic mills and buildings to the delight of visitors of all ages.

From October 18 through 31, Mill City Haunts offers a number of attractions, both free and ticketed, that will light up the night and satisfy the curious. 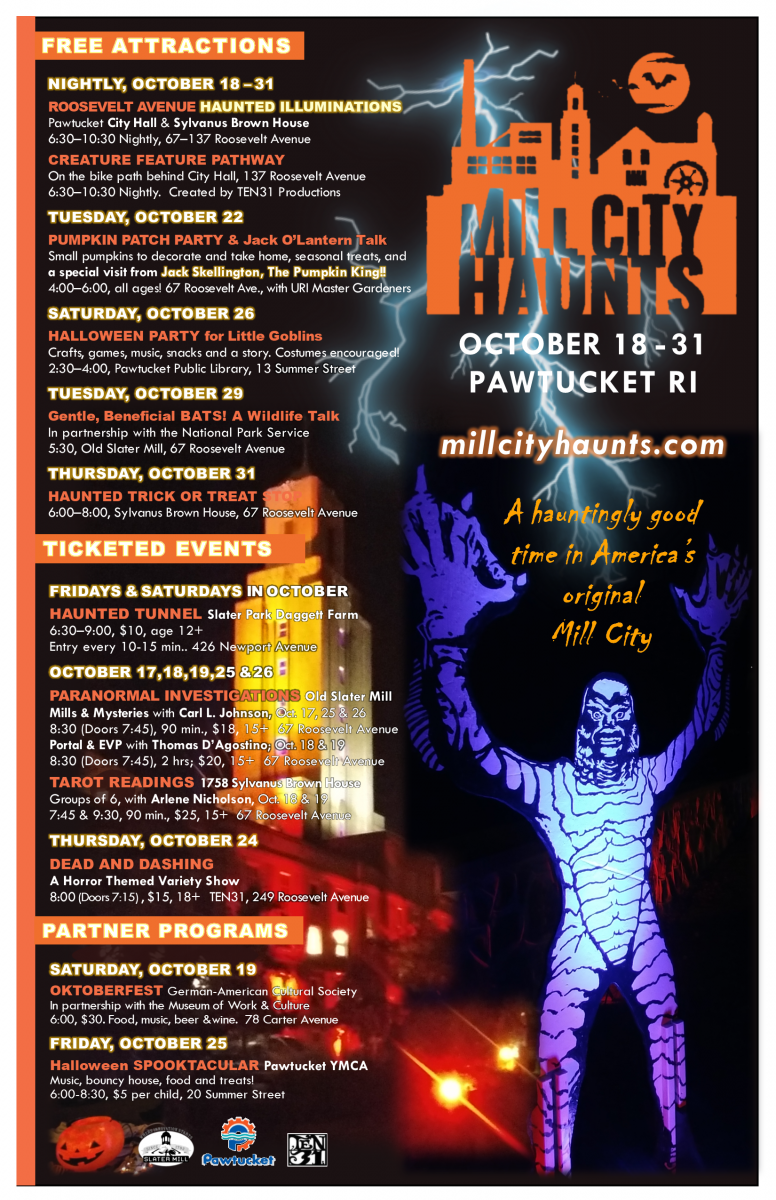 The central attraction is the Haunted Illuminations of historic City Hall and the 1758 Sylvanus Brown House on Roosevelt Avenue, and the “Creature Feature Pathway,” created by TEN31/Revel Factory, that is installed behind City Hall along a small portion of the bike path.

“It’s certainly a different way of looking at and appreciating our historic downtown,” said Lori Urso from Old Slater Mill. “And because Old Slater Mill has such haunted lore associated with it anyway, it’s a wonderful expansion of the programming we typically do at this time of year.”

The lightings are planned for all fourteen evenings, giving the community more opportunities to visit, take photos and selfies, and just celebrate our most colorful season.

Other Mill City Haunts events include a free Pumpkin Patch Party at Old Slater Mill on October 22 featuring none other than Jack Skellington, The Pumpkin King himself.  From 4 – 6 p.m., kids and families may come and pick out a pumpkin and get some decorating help from the URI Master Gardeners.

The Pawtucket Public Library is also hosting a Children’s Halloween Party on Saturday, October 26 at 2:30 p.m., which includes crafts, games, music, snacks, and a story. Admission is free.

The National Park Service is offering a free talk about on Tuesday, October 29 at 5:30 p.m. at Old Slater Mill. “Gentle, Beneficial BATS!” is open to anyone, and admission is free.

For a few bucks, you can participate in Paranormal Investigations and Tarot Readings at Old Slater Mill on October 17, 18, 19, 25 and 26; Ten31’s “Dead and Dashing” haunted theme variety show on October 24; the YMCA’s Halloween Spooktacular on October 25; or the perennial favorite Haunted Tunnel at Slater Park Daggett Farm on Fridays and Saturdays all month long.

“We are very pleased to work with local partners to host Mill City Haunts in Pawtucket for a second year,” said Pawtucket Mayor Donald R. Grebien. “There was a lot of excitement surrounding last year’s events, and it provided our visitors and those around the state a look at the dynamic events and happenings that take place here in Pawtucket. I especially thank the Old Slater Mill Association and Ten31 for their leadership and creativity in this year’s events.”

Many of the attractions are free of charge, but a few of the haunts require tickets. See the full list at millcityhaunts.com, or pick up a Mill City Haunts brochure at City Hall or Slater Mill.

PAWTUCKET – The City of Pawtucket announced today that several sites will be available as warming centers to help cope with the extreme cold expected over the next few days.The following local...  Read More >