The City of Pawtucket’s Arts and Culture Commission hosts a major exhibit of the work of 90-year-old internationally acclaimed Artist, Mihail Simeonov, running from September 19-December 31, 2019. An opening reception to meet Mihai will be held at Pawtucket City Hall, Thursday, September 19, 2019, from 4:30 p.m. to 6:30 p.m., 137 Roosevelt Avenue, Pawtucket, RI 02860.

Home to a thriving arts community, the City of Pawtucket is delighted to present this first-time major exhibition by an internationally-acclaimed sculptor and resident, says Mayor Donald R. Grebien. “As a city committed to art, design and innovation, we are delighted to be able to share the work of such an important artist. Bridging cultures, aesthetic worlds and ideas, Mihail’s work is both visually stunning and deeply rooted in history. He is remarkable for his continued innovation and relevance in contemporary art,” says the Mayor.

“As we celebrate the arts in the City of Pawtucket throughout September, we are honored to have Pawtucket-resident Mihail showcase his visionary artwork at a major exhibit in the City Hall Art Gallery”, states Miram Plitt, Chair of the City’s Arts and Culture Commission. “We invite anyone with an interest in art and those who rally to protect the world’s wild life to attend our opening reception to celebrate the life-time creativity and vision of Mihail whose extraordinary works of art can be seen at the United Nations,” says Plitt. 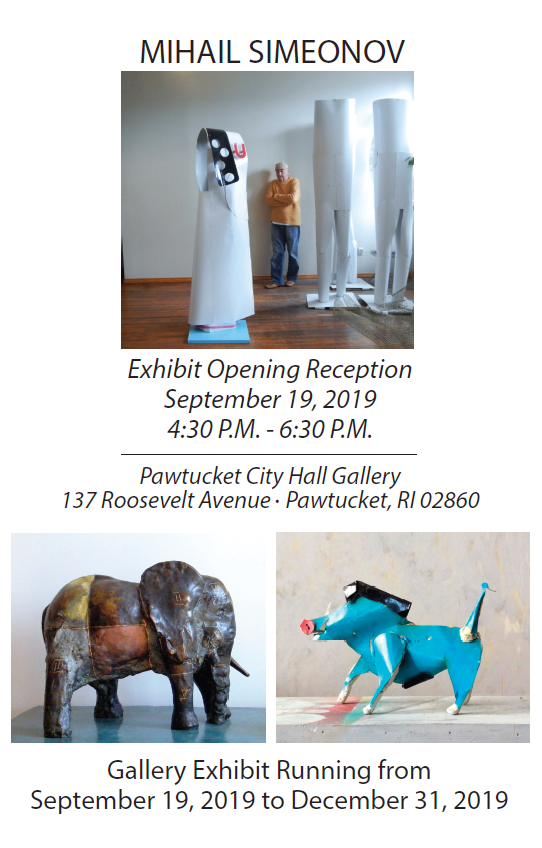 Although the 90-year-old Pawtucket resident has practicing his craft for over 75 years, with major public monuments in Bulgaria and Tunisia, he is best known for his life-size bull elephant bronze sculpture at the United Nations (UN).

In 1980, after several years of planning and work on a breakthrough idea, Mihail travelled to Kenya where, with the help of the country’s Ministry of Wildlife, he took a cast of a live bull elephant bull in the wild. The elephant survived the 72-minute process completely unharmed. From that live cast, Mihail created the Cast the Sleeping Elephant bronze, an over-life size sculpture. The sculpture was officially inaugurated by Secretary General Kofi Annan and installed at the United Nation’s headquarters in New York City in 1998, where it continues to serve as a symbol of man’s dedication to preserving all living creatures.

Mihail says his bronze elephant is a symbol of the importance to protect all wildlife and it is aptly placed at the United Nations, the home of all nations.

The Travels of Mihail

Mihail was born in Bulgaria in 1929, where for seven years he studied philosophy and majored in monumental sculpture at the academy of Fine Arts in Sofia. When one of his commissioned monuments provoked the wrath of Bulgaria’s communist government, Mihail went into exile in Tunisia. In Tunis, enchanted by an exuberance of Mediterranean colors and intense light, the artist embarked on a new aesthetic journey.

After several in Tunis, where many of his large-scale monuments continue to stand, Mihail and his wife, Lilda, emigrated to the United States in the early 1970’s, settling in a loft in New York City. Mihail was granted entry because of his status as an “exceptional artist.”

For over 10 years, Mihail also worked out of a boathouse art studio in Lloyd Harbor, where he was an artist in residence at Friends College. Later relocating to Millbrook, New York and then to Orient, Long Island. Mihail and Lida raised their daughter, Iana, a filmmaker who now lives in San Francisco with her cinematographer husband.

Around 2003, Mihail was looking for a new home and location for his art studio. An article in the Travel Section of the New York Times, picked up at random in an empty train car that featured the historic Pawtucket mills prompted him to write a letter to Mayor James E. Doyle. Mihail thought he might like to move there. Three days after writing this letter he was contacted by Herb Weiss, the City’s Economic & Cultural Affairs Officer. Two years later he would become a Pawtucket resident with Lida, living in one of the city’s mills.

According to Iana Simeonov, Mihail’s daughter and a former art dealer and critic, the Pawtucket exhibition showcases several distinct but related bodies of Mihail’s work in a range of media, including bronze, painting and drawing. The works illustrate how the 90-year-old artist continues to evolve artistically, elaborating on themes which have compelled and fascinated him since the 1960’s.

“Mihail’s 75 years as artist have not only been prolific, but extraordinary in terms of their contribution to the history and vitality of contemporary art,” adds Simeonov, “Mihail’s work has been the subject of dozens of solo exhibitions from New York to Chicago, Stockholm, Basel, Geneva to Milan.

“Mihail’s work is held in over 100 private and museum collections around the world, and his large-scale public monuments continue to stand in public squares and prominent spaces in the US, Europe, and Africa. His artistic legacy and personal story are uniquely compelling and, at age 90 he continues to innovate with materials and is as freshly obsessed with making art as the day he entered the academy,” she adds.

Mihail has not looked back since he relocated to his Pawtucket mill. “I like Pawtucket for its history and old charm and it’s only minutes away from Providence,” he says, noting that his artwork now reflects the industrial character of the City.

Mihail acknowledges that he has never had an exhibit at City Hall. “It’s highly unusual,” he says, admitting that he feels “grateful and happy.”

Herb Weiss, LRI’12, is a Pawtucket writer covering aging, healthcare and medical issues. To purchase Taking Charge: Collected Stories on Aging Boldly, a collection of 79 of his weekly commentaries, go to herbweiss.com.