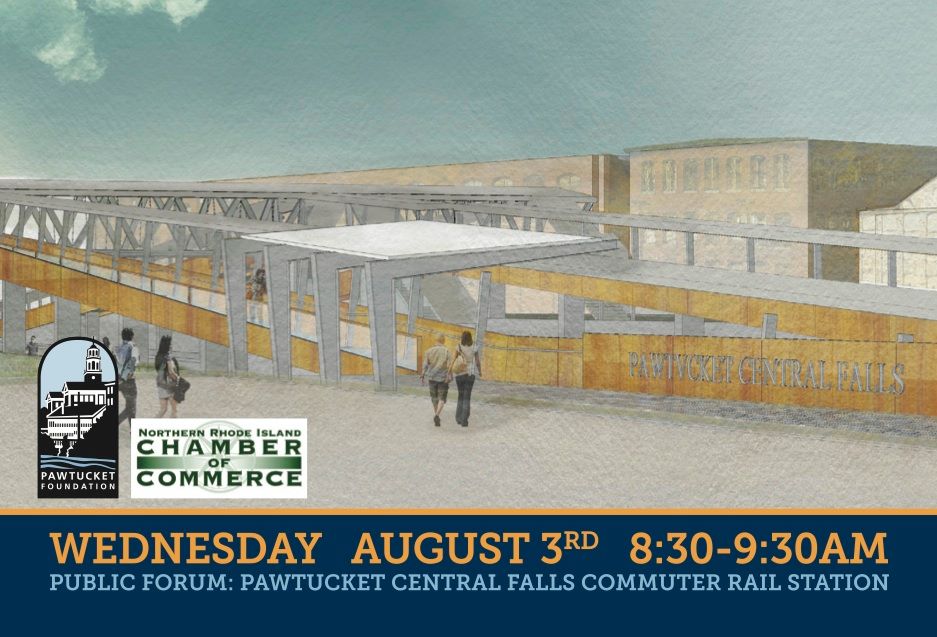 Your attendance is needed!

Support for the Pawtucket/ Central Falls Commuter Rail means increased transit connections to jobs, recreation and easier commutes. Bring your questions and support for the station on:

This project is at critical point and we need to hear from you on August 3rd.

Refreshments will be served

This public forum hosted by the Pawtucket Foundation and the Northern Rhode Island Chamber of Commerce.

The Pawtucket Foundation, in partnership with the Northern Rhode Island Chamber of Commerce, will host a public forum August 3, 2016, 8:30am-9:30am at the Blackstone Valley Visitors Center. This meeting will present the latest updates on the Pawtucket Central Falls Commuter Rail Station to explain and gather support for the TIGER grant application and the proposed train station. Representatives from RIDOT, RIPTA, the Pawtucket Foundation, and from the Planning Departments of Pawtucket and Central Falls will participate in the presentation and answer questions.

Jan Brodie, executive director of the Pawtucket Foundation, stated that that this meeting is "an effort to keep pressure on about the train station, and to ensure that our state and federal elected officials feel the public's energy and enthusiasm about making this commuter rail station happen." The Pawtucket Foundation has advocated for improved public and multimodal transportation and economic development for Pawtucket and Central Falls since its founding in 2001.

"Multi-modal transportation is critical to so many aspects of a well-functioning city," states Pawtucket Mayor, Donald Grebien. Central Falls Mayor, James Diossa, states, "We want to make sure the residents of Pawtucket and Central Falls have direct access to the Boston job Market, which a commuter rail station in our area will guarantee." Grebien adds, "We also want businesses and visitors to have access to a full menu of transportation options." He continues, "Pawtucket is such a great place and our people deserve direct rail service."

In her opinion piece published in The Providence Journal ("Commuter rail station is smart economics" July 6, 2016) Brodie states: "This is not a case of build it and they will come. 'They' are already here. Current ridership already supports a station. And the transit-oriented development around a station in Pawtucket-Central Falls offers attractions and a lifestyle that would likely double the [ridership] numbers." In response to a recent article in The Providence Journal (Pat Anderson, "Plans for a $40M commuter train station in Pawtucket hinges on U.S. grant." June 19, 2016) suggesting that "Rhode Island's recent history with new train stations, like the sparsely used Wickford Junction station in North Kingstown, casts a shadow over arguments for a new commuter rail station in Pawtucket," the point is made that over "9,100 people per square mile live in Pawtucket-Central Falls, a density similar to Providence" and that the "at-capacity ridership at South Attleboro and Providence stations is proof of that density and demand."

John Gregory, president of the Northern Rhode Island Chamber of Commerce, stated that one of the Brookings Institute's primary recommendations to improve the state's economy was to "drive new station improvements and transit hub developments, highlighted by a new Pawtucket/Central Falls commuter rail station." He continues, "Along with our partners, we feel that this forum is an outstanding opportunity to find out where we stand and what still needs to be done."

The public can find out more about the proposed concept plan for the Pawtucket Central Falls Commuter Rail Station at: http://projects.vhb.com/PawtucketCommuterRail/

About the Pawtucket Foundation / pawtucketfoundation.org

The Pawtucket Foundation represents the business and not-for-profit sector as an advocate and catalyst for downtown, riverfront and transportation gateway enhancements within the City of Pawtucket. As civic entrepreneurs, we foster a vision of the community's future by mobilizing and coordinating research, information, talent and resources to positively impact the City.

About the Northern Rhode Island Chamber of Commerce / nrichamber.com

The Northern Rhode Island Chamber of Commerce strengthens the economic climate through business leadership that fosters member and community prosperity.

The City of Pawtucket is looking for interested parties to respond to the RFP for two Affordable Housing projects in the city.

The City of Pawtucket is looking for interested parties to respond to the RFP for two Affordable Housing projects in the city.The two locations are as follows:305 Owen Avenue160 Beechwood...  Read More >